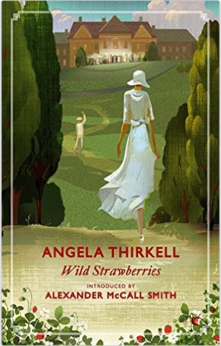 This title does not refer to the Ingmar Bergman film but to the second (or third, depending on where you look) Barsetshire novel by Angela Thirkell. Unlike the others I’ve reviewed lately, Wild Strawberries was written before World War II. It is a delightful and gentle comedy with a romantic triangle.

Wild Strawberries is about a summer with the Leslies. Lady Emily is universally adored, a vague woman always leaving a trail of her possessions behind. She is also a managing type whose attempts to arrange things that are already decided repeatedly throw the family into chaos. The novel opens with a hilarious scene in which the family is late for service and disrupts the sermon while Lady Emily tries to tell everyone where to sit. Lady Emily is the mother whose passing is much lamented in Enter Sir Robert, which I reviewed a few months ago.

And if I am not mistaken, Agnes, a daughter of the house, is the same Lady Graham who is a major character in Enter Sir Robert, and as in that novel, Robert is continually referred to but not present. Agnes is a young mother with three children, kind but silly, and entirely obsessed with the children.

Other members of the household are Mr. Leslie, gruff but kind, sons John and David, and grandson Martin. Martin is the son of the Leslies’ deceased oldest son. John is a widower who has been mourning his wife Gay. David is a charming but selfish playboy.

The Leslies have invited Mary Preston to spend the summer with them while her mother recuperates at a spa on the Continent. Mary is Agnes’s niece by marriage, and her affections play a major part in the plot. She is a young, naive girl who is immediately charmed by David. John, on the other hand, falls in love with her when he hears her singing. We find ourselves rooting for John, but in Thirkell’s novels, the characters we like best are not always successful in love.

Providing humor are a visit from Mr. Holt, a toady to the upper class and expert on gardens, who invites himself to visit the Leslies, and the establishment at the vicarage of a French family. Seventeen-year-old Martin gets himself embroiled in a demonstration to restore the French monarchy, and Mr. Holt finds himself rewarded for his gate-crashing by being entertained by Agnes and her children.

This is a delightful novel with sympathetic and engaging characters and a great deal of humor. I enjoyed it very much.

I have to say that my Moyer Bell edition (not the one pictured above) was riddled with typographical errors, including a chapter that literally ended in the middle of a word, to be completed after the next chapter title. I just picked this up at a used bookstore, but next time I buy Thirkell, I will look for a Virago edition.