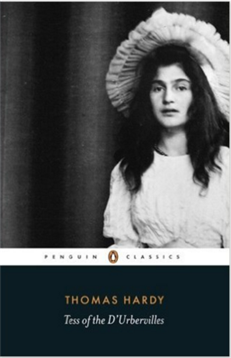 Best Book of the Week!
I love Thomas Hardy’s rural novels set in southwest England, and one of the highlights of a trip to England years ago was visiting his cottage in Dorset. My favorite of his novels has long been Tess of the D’Urbervilles, which I recently reread. I don’t mind admitting that in this reread, I was picturing scenes from Roman Polanski’s wonderful movie Tess, which follows the novel carefully and envisions it beautifully.

There is no doubt about it, Tess is a real tear-jerker, so if you prefer novels with happy endings, this is not the one for you. Still, in its own way, the novel ends hopefully.

The novel spans about five or six years, and we meet Tess as a naive young country girl attending a club dance. There she first sees a young man who will be important to her, Angel Clare, but he does not dance with her.

Hardy can be quite the fatalist, though, and Tess’ fate is sealed already, when her father John Durbeyfield meets a clergyman who dabbles in genealogy. Parson Tringham ironically addresses him as “Sir John” and tells him his family is the remains of the once-powerful D’Urbervilles. Her father immediately sets off to celebrate.

Tess’ foolish and feckless parents learn there is a rich old lady by the name of D’Urberville some counties away, so when Tess is partially responsible for the death of her father’s horse (because her father was too drunk to take the bees to town), they push her to go visit the old lady and claim kinship with her in hope of financial benefit. There she meets the charming wastrel Alec D’Urberville, who knows perfectly well they are not related, his family having bought the name and titles.

Tess gets a job from Mrs. D’Urberville as a poultry keeper, but Alec is always pursing her with his attentions. Tess finds these attentions unpleasant, but she is too naive to know what they mean or what she might fear.

Tess returns home with a past that is obvious to everyone and heartache ahead of her. Eventually, she gets another chance, as a dairymaid. There she meets Angel Clare, a gentleman studying to be a farmer, and finally falls deeply in love. But Angel is an idealist who has fantasized her into the embodiment of a pure child of nature. So, he is the last person to forgive her past.

Tess of the D’Urbervilles was a controversial book when it was published in 1891, because Hardy subtitled it “A Pure Woman.” This subtitle caused an uproar with the Victorians. Hardy’s message is strongly against the societal and religious laws that would condemn Tess.

Another aspect of the novel that I found more interesting this time through is that it depicts a rural way of life that is long gone. Although many of Hardy’s novels are rurally based, this one has more about the customs, work, and lifestyle as we follow Tess from one workplace to another than any of his novels except Far from the Madding Crowd. Tess’ father is a freeholder, a step up from a migrant farm worker, one whose family has leased the same land for generations. But when John Durbeyfield dies, the lease is up, and his widow and family are abruptly evicted so that the landlord can make room for someone who works for him. Such activities, Hardy makes clear, are the root cause of people migrating from the country to towns and cities, not that they were unsatisfied with country life.

Years after reading this novel last, I still became thoroughly engrossed in the story. It is a powerful one, poetically written, with gorgeous descriptions of the countryside and vivid imagery. I just love this novel.

The Land of Green Ginger

The Warmth of Other Suns: The Epic Story of America’s Great Migration