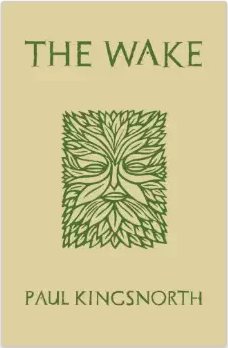 Best Book of the Week!
The Wake was one of the most unusual reading experiences I have ever had. The closest I can come to it is the revelation of reading Benjy’s sections of The Sound and the Fury. What Paul Kingsnorth has done is write a novel about the aftermath of the Norman Conquest entirely in a “shadow language” that approximates and gives the flavor of Old English while being understandable to the modern reader.

Buccmaster is a socman of Holland in the Lincolnshire fens. A socman, Kingsnorth’s glossary explains, owns his land and owes allegiance only to the king under Danelaw. At the beginning of the novel, Buccmaster is a well-off man who has a large house and about 90 acres of land, servants, and a seat on the Wapentec, the local court of justice. Buccmaster is a proud and angry man, and we find, not always a reliable narrator.

Soon word comes that King Harald is calling up the army against the invasion of Harald Hardrada, the King of Norway. Buccmaster owes King Harald six weeks’ service a year, but he refuses to go. His sons do, however. Of course, while Harald and his army are repelling Hardrada, William the Bastard (William the Conqueror) attacks.

Buccmaster soon finds his world destroyed. His sons never return from Hastings. The Normans arrive claiming all of the hamlet’s land. Buccmaster’s home is burned to the ground and his wife murdered one day while he is out eeling.

Buccmaster was raised by his grandfather to believe in the old ways, not the newer ones of the White Christ. He decides to take his great sword, which his grandfather told him was given to him by Welland the Smith, and raise a troop of Green Men, essentially guerilla fighters, to ambush the Normans.

This novel is as much about the conflict between the old Germanic-Norse ways of the English and Christianity as it is about the little-known war of resistance against the Normans after the conquest. Buccmaster makes a complex and troubled main character.

Kingsnorth has said that he chose his approach for the novel because he doesn’t like historical novels written in modern language. I am torn about that, because I would rather see modern language than clunky fake archaic language. But Kingsnorth has done a fantastic job of steeping himself in the time, and his goal of conveying the alienness of the 11th century English through language is certainly achieved.

The Wake is an enormously powerful novel. It is probably not for everyone. You have to be willing to invest yourself in it enough to tolerate some early slow going. There is a glossary, but it doesn’t include all the words. You can figure most of them out by sound or context. Still, I strongly believe it is worth the effort, and after awhile, I think I was reading almost as quickly as usual.

It may be hard to find this book. I had to order it from England. But if you are interested, you’ll find it very much worth the effort. I read it because it was long-listed for the Booker Prize. Frankly, I think it was better than the winner.

I’ll end with this quote, which begins the book:

I have persecuted the natives of England beyond all reason.
Whether gentle or simple I have cruelly oppressed them.
Many I unjustly disinherited, innumerable multitudes perished through me by famine or the sword.

Having gained the throne of that kingdom by so many crimes,
I dare not leave it to anyone but God.

The Adventure of English: The Biography of a Language