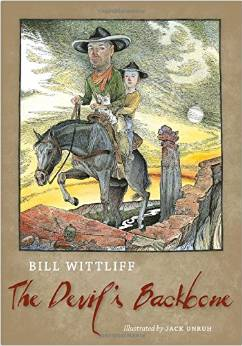 The Devil’s Backbone is a western adventure tale related in an unsophisticated vernacular style in both first person and third person. It is an unusual novel but reminds me most of, perhaps, True Grit or The Adventures of Huckleberry Finn. The third person narrator is barely there but relates the first person story his father told him. The book is illustrated by Jack Unruh.

Papa, as the third-person narrator calls him, is a young boy growing up in the Texas Hill Country when his father Karl kills a horse after a dispute about it with his wife Amanda. Amanda saddles up her horse Precious with the concho-decorated saddle her father gave her and leaves. After Karl has gone off for a few days and returned, a neighbor, Miz Choat, arrives to tell Karl that she has promised Amanda to send the boys to school, so she takes Papa and his older brother Herman back with her. But after Herman has attended school awhile, he takes off.

Papa enjoys his time with the Choats, but after a few months his father arrives to take him back. At home he has installed another woman, Miss Gusa, who is pregnant.

Papa has clearly been brought home as a cheap source of labor. Eventually, Karl’s brutality makes Papa decide to leave and look for his Mama. On his journey he encounters outlaws, a dying Indian, a prematurely born baby, a family of Mexican migrant workers, and several loyal friends, including the cowboy Calley Pearsall.

I enjoyed this tale. At first, I thought it might become a series of tall tales, but nothing happens in it that seems wildly exaggerated. However, it does have the flavor of a folk tale. The only thing I found a little irritating was the double narration. We learn nothing at all about the narrator, so I don’t really see the purpose of that approach, which leads occasionally to such confusing constructions as “I said, Papa said.”

Although this novel may sound like children’s fiction, I don’t think I would recommend it for younger children because of some of the events. Older children would probably like it, as it has lots of adventure. Some of the subject matter may be inappropriate, however, as there are events such as murders and death in childbirth, so use your discretion. This book was a choice of my book club, all adults, and we all enjoyed it.

I have been on the Devil’s Backbone (pictured on the cover). These days it is a narrow two-lane highway across a ridge with spectacular views on each side. I heard it had been widened, but to think it was once so narrow is amazing.