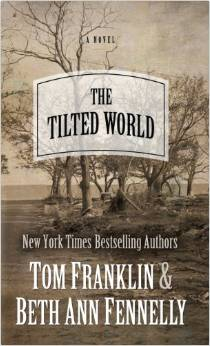 Best Book of the Week!
On Good Friday 1927 after months of rain, the levee on the Mississippi near Greenville, Mississippi, collapsed, causing a gigantic flood that swamped 27,000 square acres of land in the Delta, made many people homeless, and killed an untold number of people. The Tilted World is a fictional account of the days before and after the flood.

Dixie Clay has been married for six years. Although her husband Jesse was a fur trader when she married him, it has taken years for her to realize he’s a bootlegger or to see him for the kind of person he is. After her baby died, she started making liquor herself, but she has come to hate her husband. At the beginning of the novel she helps him capture two revenue officers, thinking he will bribe them to make them go away. But she hasn’t heard of them since and is worried that he killed them.

Ingersoll and his partner Ham Johnson are revenuers who have been dispatched by Secretary Herbert Hoover to Hobnob to find out what happened to the other two officers. On their way, in the sodden territory along the river, they find a dying store clerk who has shot two looters. The looters were a couple with a baby, and Ingersoll can’t bring himself to leave the baby there alone. So, Ham goes on ahead to Hobnob while Ingersoll takes the baby to the orphanage in Greenville. But he is an orphan himself, so he turns around and brings the baby back to Hobnob to inquire for someone who would like to take him. He ends up giving the baby to Dixie Clay.

Later, he is disturbed to realize that Dixie’s husband is probably the bootlegger. But he and Ham don’t have time to look for the bootleggers. They have represented themselves as engineers and find that the levee needs to be guarded. There are rumors that rich bankers are planning to sabotage the levee at Hobnob so that the flood will be lessened in urban areas.

This novel is full of energy and action. There is a growing attraction between Dixie and Ingersoll, but their differences seem too large to overcome. I really enjoyed the characters and setting as well as learning about this massive flood that we have all forgotten.