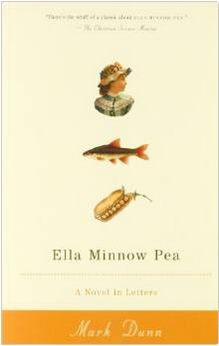 Even though I enjoyed Mark Dunn’s unusual novel Under the Harrow, I avoided Ella Minnow Pea for some time because it sounded too gimmicky. When I finally read it, I found it mildly entertaining, but yes gimmicky, although I can see why it would amuse those with a different sense of humor than mine.

Ella Minnow Pea is a 17-year-old girl living on a fictional island off the coast of South Carolina that is not part of the United States. This island, called Nollop, is named after Nevin Nollop, the supposed author of “The quick brown fox jumped over the lazy dog.” Nollop is the island’s most eminent native son, and there is a cenotaph containing the sentence in the middle of Nollopton.

This epistolary novel opens with a letter from Ella to her cousin Tassie in Nollopville, in which she relates that the letter z fell off the cenotaph. Soon, the island council announces that the spirit of Nollop has used this way to send the message that the letter z must be removed from all island correspondence and speech. Violation of this statute is punished severely with a third occurrence resulting in banishment. The libraries are soon closed, because no books exist without the letter z. A rebellious youth is banished almost immediately. Conveniently, the procedures for running the government are destroyed, including those for recalling the council, because they contain the banned letter. People make mistakes and are punished or banished. The radio station eventually shuts down and the newspaper struggles, because it is too difficult to avoid the letter.

It is mildly amusing to see how the characters get around the problem of the disappearing letters in their correspondence. Of course, the novel is a statement about tyranny and freedom of expression.

Dunn’s latest novel Ibid, a novel written entirely in footnotes, has good reviews for its originality. Another gimmick, and I’m not sure I’ll try it. Dunn’s interests seem to lie in inventing isolated imaginary places where over-elaborate speech is common, along with made-up words, and where the government can’t be trusted.

Have you read Ibid? What did you think of it?