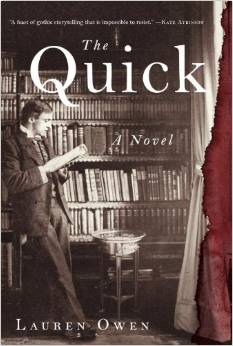 At first, The Quick seems like a straightforward historical novel about a young writer in 19th century London. But it has a twist. To be honest, if I’d known what the twist was beforehand, I probably wouldn’t have chosen this novel to read, because frankly, I’m tired of this subject. That said, I’m glad I read the book, because it is absorbing, well written, and quite suspenseful.

James and Charlotte Norbury grow up neglected in a rambling house in Yorkshire. Their father rarely comes near them after their mother dies and seems to forget they might need attention or tutors or governesses. So, while the two children run wild, it is the older Charlotte who takes care of James and teaches him to read.

After their father’s death, James goes away to school while Charlotte stays in the care of Mrs. Chickering, an elderly relative. James eventually moves to London to try being a writer, but he is not wealthy and has difficulties finding acceptable lodgings he can afford. An acquaintance introduces him to Christopher Paige, a young aristocrat looking for someone to share his rooms. Although the more austere and shy James does not envy Paige’s life of frivolity, he slowly begins to realize that Paige is his first friend—then that he is more than a friend.

One night, though, a terrible event takes place. Christopher Paige is killed and James disappears. When James does not appear at Mrs. Chickering’s funeral, Charlotte travels to London to find him.

In London, Charlotte’s inquiries attract the attention of the members of a powerful and mysterious club, the Aegolius. There has been an unexpected event at the club, and other people are looking for James. Soon, Charlotte finds herself involved with a secret substrata of the city.

Owen depicts a wonderfully atmospheric London. Although I was at first disappointed with the direction the story took, I still was unable to put this book down.