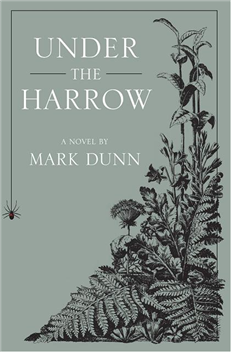 Best Book of the Week!
Under the Harrow is an unusual and imaginative novel. It is described in some write-ups as if Charles Dickens had written a modern thriller, and that description does give a sense of the novel.

Dingley Dell is a hidden valley occupied by about 11,000 people who have never been out of it. Their history relates that their ancestors were deserted as children in an orphanage during a terrible plague in 1890. With the only books available to them an old encyclopedia, the Bible, and the complete works of Charles Dickens, they have invented for themselves a very Dickensian environment, not omitting some of its evils, like a workhouse, a huge separation between classes, and a government by a privileged few. Only a few people have ever left the valley to see what is outside, and only a very few of them ever returned. Those few were promptly clapped into the madhouse, victims of a terrible mental illness.

Frederick Trimmers has lately suffered from some misgivings about the state of the dell. He is a writer for a muck-raking newspaper who sees much to improve in the dell. Lately, though, he has more personal problems. His troublesome nephew Newton, sent off by his parents to school, has run off from the dell. Newton’s father Gus soon goes after him. While they are having unexpected adventures outside, Frederick is learning disturbing things about the existence and history of the dell. Soon he begins to believe that the entire valley is in danger.

Dunn is having some fun with us while building up a fair amount of suspense. The novel is narrated in a sort of über-Victorian English. The inhabitants of the dell have almost all taken some of the silliest names from Dickens, and many of them remind us of his oddest characters. And in a moment of major action, he offhandedly remarks that the farmer in the dell purposefully left the cheese standing alone. That will give you a little idea of what you have in store, although he doesn’t overdo it. It’s about what you must expect from an author known for a novel where letters disappear one at a time from the text or another written entirely in footnotes.

There is a conspiracy, of course, and if I have a complaint, it’s about the unbelievable extent of the conspiracy and the unlikelihood, given how big Dunn makes it, that everything would come out okay. Still, I give this novel high marks for its originality and its ability to capture and hold my attention.