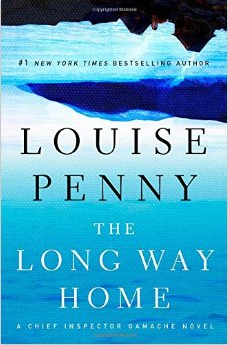 After the traumatic ending to How the Light Gets In, Inspector Armande Gamache and his wife Reine-Marie have retired comfortably to the lovely village of Three Pines. Gamache feels none of the restlessness experienced by retired cops in other crime series, so he is not really pleased when Clara Morrow comes to him, reluctantly, with a problem.

Clara’s difficulties with her husband Peter have been growing throughout the series. The two are both artists, and their relationship was fine as long as he was the more acclaimed. But of late, Clara has gained a reputation that has surpassed Peter’s, and he has been jealous and unsupportive.

A year ago Clara asked him to leave. But she made a date with him to come back in exactly a year to see where their relationship lay. That date has come and gone, and Clara has no idea where he is. She wants Gamache to find him.

Gamache finds it easy enough to trace Peter’s movements to Paris and Venice and then, oddly, Scotland through his credit card use. They find he returned to Toronto a few months ago and then disappeared.

With Clara leading, Gamache, his son-in-law Jean-Guy, and Clara’s friend Myrna set off to find Peter, eventually ending up in a remote village at the mouth of the St. Lawrence. In their quest, they encounter a tale of madness and revenge.

This novel makes an interesting start to a new life for the series. I’m not sure how successfully it will continue, as there have been more murders per capita in Three Pines than just about anywhere. But perhaps basing the series in this small village rather than continually returning there to deal with crimes will work better, because the crimes can take place elsewhere and readers can still visit this peaceful village. I have already enjoyed some of the other novels that were set elsewhere in Canada, usually in gorgeous or interesting locations.