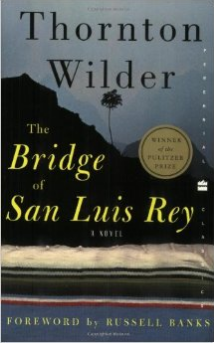 The Bridge of San Luis Rey is a moral fable that explores whether there is a purpose in life beyond that of a person’s own will. This theme is not one that interests me, nor do I usually enjoy fables, but I did enjoy Wilder’s rich characterizations in this short novel.

The novel begins in 1714 in Peru, when the bridge of San Luis Rey collapses, killing five people. A monk, Brother Juniper, believes that this event may be his opportunity for scientific proof of the will of God. So, for six years he collects information about the lives of each victim.

What follows is a chapter about each of the lives of the victims, in all their humanness and contradictions. The Marquesa de Montemayor is an ugly, rich old woman who is despised by many for her eccentricity. She obsessively loves her daughter, who has moved to Spain to get away from her, and she writes her rambling but marvelous letters that only her son-in-law reads. With her dies her young maid Pepita.

Esteban is a twin whose brother Manuel recently died. Esteban and Manuel were inseparable until Manuel fell in love with the actress Perichole, who used him to write her love letters. Ever since Manuel’s death, Esteban has been inconsolable.

Uncle Pio was a wanderer who eventually settled down to mentor Perichole, whom he raised from a young barroom singer to become a great actress. But Perichole begins to have ambitions beyond the theatre and eventually throws off Uncle Pio. Uncle Pio has devoted himself only to her, though, and promises to educate her son Jaime.

This novel is beautifully written and touching in its acceptance of the foibles of humanity.