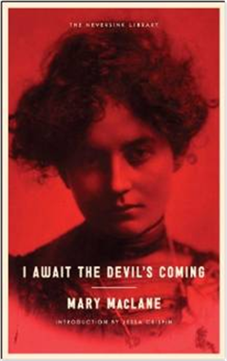 I had a strong reaction to I Await the Devil’s Coming, which I will explain in a moment. This book was written in 1901 and belongs in the category of confessional literature. It apparently was quite a sensation at the time and had a great following by young women.

Mary MacLane was a 19-year-old woman living in a Montana mining town. In the book she declares herself a genius and an egoist who is waiting for her life to start when the Devil takes her away to be his love. This book is claimed as an early feminist work, and in the introduction, there is a statement to the effect that if MacLane had been a young man, she could have gone off and made her mark.

I don’t see this book as a feminist work at all but more likely as an expression of mental illness. I have met a similar person in a relative, who complained that life was hell on earth and that the people of our town were all provincial philistines. MacLane wasn’t going to act, she was waiting for things to happen to her. You could reply that in her time and place there was nothing a respectable woman could do to change her life, but of course, MacLane didn’t care about being respectable, at least she said she didn’t.

MacLane was mentally ill not because she said she was waiting for the Devil, but because she showed signs of severe depression alternating with fervor and euphoria, and she heard voices. If she had been a young man, she would have been incapable of striking out on her own and making a success of herself.

In fact, she did not. Her book was published and she was kicked out of the house. We don’t really know how she led her life after that. She wrote another book years later that was not a success, and she died alone in her 40’s in a hotel room.

Could the situation of women at the turn of the century make a woman ill? That is another question. Charlotte Perkins Gilman obviously thought so.