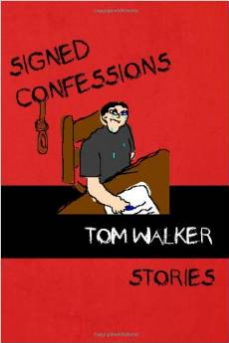 I confess to only having read about half of the stories in Signed Confessions, which was not to my taste. The main characters in the first few stories are all unlikable men who have committed acts for which they desire forgiveness.

After his gay son’s suicide, an implacable attorney regrets how he treated his boy. He remembers an earlier time when as a young boy, he was cruel to a bereaved schoolmate and found how that cruelty gave him power. Another man deserts his family and then spends his time making up stories to tell in support groups.

These two stories are written in a virile style that seems like an imitation of writers like Philip Roth and Norman Mailer. The third comes from another genre—that of dark Jewish comedy. A Jewish man who plagiarizes insults ala Don Rickles to be funny is suddenly gripped with remorse and tries to beg forgiveness of some of his victims. I will admit that the results are a bit humorous.

Walker ties the first few stories together by giving a character in one story some characteristic that you can recognize and then bringing him in as an unnamed character in another story. In one case, the attorney of the first story throws legal terms into regular conversation, as does a member of a support group in the second story. My problem was that I couldn’t imagine a lawyer actually talking that way, especially one who was son of a lawyer. It seems more likely the behavior of someone who has taken one or two law courses.

In general, the stories are written in uninspired prose and show no signs of subtlety. The fourth story, “Ode to Billy Jeff,” is a little more thoughtful than the others. Nevertheless, I chose not to finish the collection.

A disclaimer here: I received this book from from the author in exchange for an honest review.