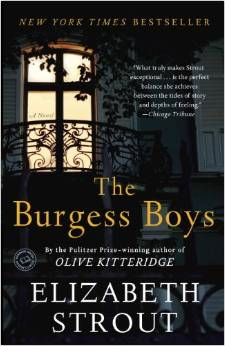 Best Book of the Week!
I had an unusual reaction to The Burgess Boys. Part of the way through, I was interested in how it would come out but at the same time wondered if I was liking it. By the end of the novel, though, I found it extremely satisfying.

The novel is about the clearly dysfunctional Burgess family, from a small town in Maine. When the three Burgess children were small, their father was killed in a freakish accident, run over by his own car rolling down the hilly driveway. All three kids were inside the car, and four-year-old Bob was behind the wheel when their mother came out to find their father dead. Mild-mannered Bob has carried this burden all his life, dealing with ridicule from his brother Jim and dislike from his twin sister Susan.

Jim and Bob long ago left Maine for New York City. But they are called back by a distraught Susan. Her son Zach has committed the inexplicable act of throwing a pig’s head into a mosque during Ramadan. Although Susan shows a good deal of ignorance about the local Somali population, the family cannot comprehend Zach’s action. He is a quiet misfit teenager, confused and pathetic, who has no friends. Unhappy especially since his father left for Sweden, he nevertheless does not seem to be angry or have any strong feelings at all except for being plainly terrified by the trouble he is in. He has a reason for his actions that is generally clueless, but it takes awhile for the family to discover it.

A former hotshot lawyer in Maine and famous for having won a high-profile case, Jim is the person Susan is relying on. Zach goes in to the police station to confess to the crime, and it seems as if the case will be handled quietly, but the civil liberties groups get involved and soon there is an uproar. When Jim’s grandstanding at a political event does more harm than good, Zach is charged with a hate crime.

As Jim takes charge while Bob tries to calm and comfort, the dynamics within the family emerge. At the same time, we learn a little about the terrified, disoriented Somali community. During the initial hearings, shopkeeper Abdikarim glimpses the true Zach and tries to help him.

As for the characters, I heartily disliked the person that everyone else admires. I think Strout intended that, and part of my satisfaction with the novel is about how that turns out.

Strout’s rich, detailed exposition is matched by her empathy for all her characters. Although I disliked some of them, they are complex and deeply human. This apparently simple story wisely examines the dynamics of guilt, family tensions, social isolation, and blind political correctness.

Life in the small Maine town seems gray and dismal at first, brightened only by the fall foliage and the hues of Somali garments. Jim and Bob have fled, and Susan and Zach are unhappy. There is little employment or hope for the residents. By the end of the novel, everyone has a little more hope.