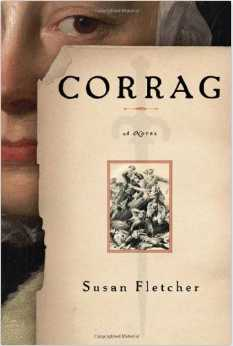 Corrag tells two tales, both based in history. One is the story of the witch Corrag, a woman about whom little is known except in lore. The other is the story of the infamous massacre at Glencoe, where at the orders of King William, British soldiers attempted to murder an entire clan after accepting hospitality from them.

The Reverend Charles Leslie arrives in the town of Inverary looking for information about Glencoe, because he thinks that public knowledge of the event will help the Jacobite cause. He hears that the witch Corrag, awaiting her trial by burning, was present at the event, so he goes to see her. He is repulsed by her, a tiny young woman with pale eyes who is filthy, with matted hair. As a religious man, he is horrified to be in the same room with a witch. But she agrees to speak to him about Glencoe if he will hear the story of her life.

So, Corrag begins telling her story. She is a gifted story teller who loves the beauties of the world, and we can see Leslie’s changing attitude toward her in the letters to his wife that begin each chapter. She is the daughter of Cora, a persecuted “witch” of northern England. Sensing the end, Cora sends Corrag off to ride north and west for safety. After much hardship and poor treatment, Corrag finally arrives in the valley of Glencoe, where she is left alone at first and eventually earns a place because of her healing skills.

This novel is haunting and at times almost poetic in style. I was in tears most of the time I read it. Corrag tells affectingly about her feelings for the world and particularly for one man. Glencoe is the only community that ever accepted her, and she loves it. She is finally able to repay the people of the glen by saving some of their lives.

The real Charles Leslie anonymously published a pamphlet about Glencoe that struck the world with horror. This reimagining of the circumstances around the event is fascinating, especially for those interested in Scottish history. The novel is also extremely touching.