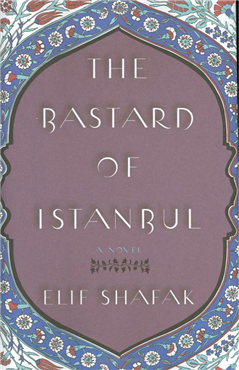 Two 19-year-old girls are the focus of The Bastard of Istanbul, which is full of colorful characters. First, though, we meet Zeliha Kazancı, twenty years before most of the action of the novel. She is notable on the streets of Istanbul during the 80’s for her miniskirts and incredibly high heels, her colorful outfits and jangly jewelry. She is defiant of convention, and bitingly invents rules of prudence for Istanbulite women as she makes her way to have an abortion. But fate intervenes.

In Arizona, Zeliha’s brother Mustafa is a student when he meets an American woman and her baby in the supermarket. Rose is newly divorced from an Armenian American, and she thinks nothing would enrage her husband’s family more than her dating a Turk.

Nineteen years later, Armanoush Tchakhmakhchian loves her father’s Armenian family, but because her parents have been at loggerheads her entire life, she does not feel totally at home on the Armenian side. She decides to visit her stepfather Mustafa’s family in Istanbul so that she can see the house her Armenian grandmother used to live in before they had to flee and try to learn more about her heritage.

In Istanbul, Asya Kazancı is even more of a rebel than her mother Zeliha. She is an angry girl who hates being a bastard and thinks of herself as a nihilist. She hangs out with a group of rather effete intellectuals at the Café Kundera. She is not pleased to learn her four aunties expect her to act as a hostess to her uncle Mustafa’s American stepdaughter.

Eccentric women dominate the Kazancı household. Asya’s great-grandmother Petite-Ma is suffering from Alzheimer’s. Her grandmother Gűlsűm is a bitter woman who spoiled her son Mustafa rotten only to have him go to America and never return. Her oldest auntie Banu is the only observant Muslim in the house, but she also is a soothsayer, who learns the future from two djinnis that sit on her shoulders. Cevriya is a rather didactic schoolteacher, and Feride toys with different types of mental illness. Zeliha, whom Asya also calls auntie, is as colorful as ever and owns a tattoo parlor.

Shafak writes in a light-hearted style that mixes in folk tales, superstitions, and family legends and is often comic. Yet it deals with some serious subjects, one being modern Turkish identity and another the Armenian diaspora. Armanoush finds when she arrives that most of the people she meets have never heard of this latter subject that has her American-Armenian friends so angry. The subject matter is an odd contrast with the light tone, for Armanoush’s visit brings old family secrets out into the open, and they are dark ones.

This novel is well written and interesting, but I can’t decide how much I like it. I feel that the narrative style somehow keeps the reader aloof from the characters so that they remain unknowable. Still, the novel gives glimpses into life in a fascinating country and informs us on historical events of which many people still are unaware. And it includes a recipe.