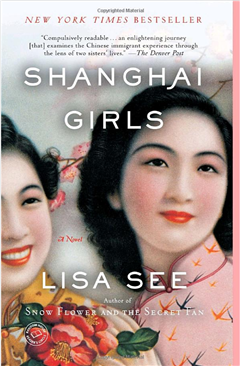 In 1937 Shanghai, Pearl Chin and her younger sister May are having the time of their lives. Thoroughly westernized and modern girls of a wealthy family, they spend their time shopping, socializing, and having their portraits painted. They are two of the Beautiful Girls, whose images appear on advertisements and giveaway calendars.

Pearl has a slight source of discontent at home, for she feels her parents favor and spoil the more beautiful May. Nevertheless, the girls are inseparable.

They are heedless to the rumblings of trouble, including the changes in their home and in their own father’s voice when he wants to tell them something. Soon he forces them to listen. He has gambled away his fortune and has arranged for his daughters to marry the sons of a wealthy businessman from the United States.

It is not long before they have met and married Sam and Vernon Louie. Sam seems pleasant to Pearl, but Vernon, May’s husband, is only fourteen and never speaks. Their father is stern and humiliates the girls on the morning after the wedding. The men leave to conduct their business and agree to meet the girls in Hong Kong before sailing, but the girls have no intention of going.

All this while there have been other signs of trouble. The Japanese are invading China and working their way toward Shanghai. The girls and their mother are forced to try to make their way to Hong Kong amid the brutality of war. Finally, they have no choice but to flee to America. A lot has already happened to the girls, but there is much more to come.

Shanghai Girls is an absorbing historical novel that examines the treatment to which Chinese immigrants were subjected for decades in the United States. The novel continues until the early 1950’s, when we learn how the Red Scare affected scores of settled Chinese immigrants, many of whom had long lived in America when China was taken over by the Communists.

I wasn’t sure how believable I found the end of the book, but it is clearly the setup to a sequel. Although I missed the delicate writing style of See’s earlier novels, her style here is appropriate for this more modern story. I am not sure I want to follow Pearl’s heedless daughter Joy into danger, but I probably will.