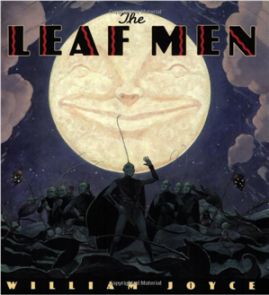 Even when I was a small child, I looked for beautiful pictures in children’s books (or bunnies–bunnies were good, especially fluffy ones). I had some books that had belonged to my mother, and I used to spend hours looking at Arthur Rackham’s illustrations of fairies and twisted trees full of goblins. As a young adult, I collected children’s books that combined good stories with illustrations by artists such as Rackham, Kay Nielsen, or Mercer Mayer.

A few weeks ago I saw a feature on William Joyce and decided to buy some of his books for my young nieces and nephews. The first one that arrived was The Leaf Men, which I had to order used in hardcover, as it is older. It is written for a young child and is a simple story about the brave bugs who climb to the top of a tree to summon the leaf men in an attempt to save a dying garden and an old woman. (I have seen some editions of this book called just The Leaf Men but the one I purchased was called The Leaf Men and the Brave Good Bugs.)

The pictures are beautifully retro, with a 30’s or 40’s appearance. One of the things that attracted me to the book was the huge man in the moon on the cover, which was one of my favorite childhood images.

This is a lovely book. I think it is readily available new in paperback, but it is easy to find good used copies of the hardcover edition online. (I always think paperbacks are going to be totally destroyed, so I prefer to buy hardcover children’s books.)

People who have older kids are probably familiar with Joyce’s work, perhaps through the Guardians of Childhood series (several of which I have also bought for my older nephew). An animated movie called Rise of the Guardians was made from this series in 2012.