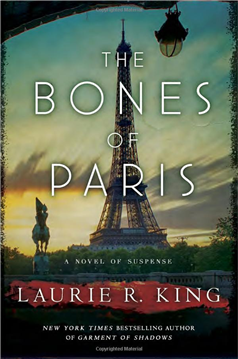 Happy Halloween! I tried to select a book that was appropriate for the occasion, although I didn’t have a ghost story lined up.

Laurie R. King’s series about Mary Russell and Sherlock Holmes is very popular, but I prefer her Kate Martinelli series or, even better, some of her dark psychological stand-alone novels. Folly is my favorite. With The Bones of Paris, she brings some of that darker sensibility to what looks like the beginning of a new mystery series.

Harris Stuyvesant is an ex-FBI agent who has been scraping a living in Europe by taking private investigation work. Among the hordes of American expatriates in 1929 Paris, he is searching for a young woman, Pip Crosby, whose relatives have not heard from her in months. A cause for possible embarrassment or worse is that Harris met Pip in Nice the year before and had a brief fling with her. Ever since a disastrous incident that ended his career and cost him his fiancée, he has been living an aimless and bohemian existence.

Two of Harris’ first stops in his search for Pip are Pip’s flatmate, Nancy Berger, and the Paris Missing Persons Bureau. Nancy seems to have a hangover but is actually suffering the effects of travel. She just returned from an archaeological dig in Greece and has not seen Pip for months. Harris finds the police officer, Doucet, concerned about what may be a series of killings.

Harris’ attentions soon narrow on three men connected with the art world whose names keep surfacing in connection with Pip and who all have a fascination with the macabre. The artist Man Ray‘s photographs of Pip focus on a gruesome scar from an accident in her youth. Count Dominic de Charmentier is a wealthy patron of the arts who owns a theatre that alternates grotesque and frightening scenes with comic ones. He also hosts parties that feature macabre decorations and terrifying staged events. Didi Moreau is a creepy, disturbing artist who makes displays of found objects, including human bones. Pip has a few of these displays in her room, as well as some of Man Ray’s photographs. When Harris begins investigating these men more closely, he finds to his alarm that his ex-fiancée, Sarah Grey, is working as de Charmentier’s assistant.

King evokes the time and place with mastery, introducing us to a dissolute café culture populated with famous figures such as Cole Porter and Josephine Baker. She also cleverly raises the creep factor by interjecting short chapters about the bones that underlie parts of Paris, foreboding snippets of conversation, and other indications that something monstrous is going on behind the scenes of glittering nightlife.