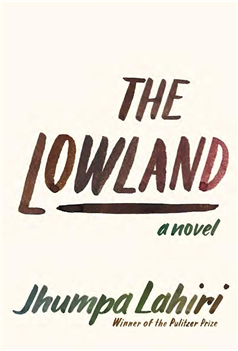 Best Book of the Week!
Today we have a treat–one of the novels that made the short list for this year’s Booker Prize.

As boys in Calcutta, brothers Subhash and Udayan Mitra are inseparable, even though their personalities are so different. Udayan, the younger boy, is bold, reckless, and charismatic. Subhash is quiet and responsible.

As they reach college age, Subhash dedicates himself to his studies while Udayan becomes involved with the Naxalites, an obscure radical leftist group that takes its name from solidarity with the poor farmers of Naxalbari who rose up against their landlords in 1967. Subhash, who is apolitical, stays away from these activities and soon goes to Rhode Island to attend graduate school.

Subhash is called back to India because Udayan is dead. He returns to a home of grief, where his parents hardly speak to him or move from their balcony overlooking the street, where his mother goes out periodically to tend the small stone marker in the Lowland, a marshland where the boys had played and where the police shot Udayan in custody.

Subhash’s parents do not speak to his brother’s wife Gauri, and soon he understands that they hope to drive her away and take custody of her unborn child. So, Subhash offers to marry her and bring her back to the States so that he can care for her and the child. Gauri agrees.

Although Lahiri chooses to begin her novel in turbulent times, both in India and the United States, where demonstrations against Vietnam are taking place, her characters seem distanced from this activity, even though their lives are irrevocably changed by what happened in India. Incidents are described, but at a level that seems far removed from their reality. Only at the very end of the novel do we understand Udayan’s viewpoint, and it is just of the last few moments of his life.

I don’t know if this is a criticism, though. This novel is not so much about these political activities as about Udayan’s actions and their results, about the emotions that arise from them. The novel is about the complexities of grief and how they evoke other emotions–anger, isolation, inertia. As Maureen Corrigan remarks in her review of Unaccustomed Earth, “All that lushness electrifyingly evokes the void.” In The Lowland, we’re not so much faced with lushness as a marshy wasteland. This wasteland is in itself a metaphor. In the monsoon season it is one marsh, but when it becomes drier, it is separated into two ponds, just as Subhash and Udayan, and later Subhash and Gauri, are together and separate, each failing to comprehend the other.

Finally, the novel is about betrayal. Spanning more than 50 years and four generations, this novel, apparently broad in scope, is actually more concerned with private and personal tragedies. It evokes an atmosphere that is at once poignant and arid.