Of the Shakespeare tragedies I have been reading, I think I have the least sympathy for the characters in Antony and Cleopatra (except perhaps for Othello–I have no sympathy at all for him). One of the problems is in, of course, how their relationship has historically been portrayed–with Cleopatra as a manipulative slut instead of a sovereign trying desperately to save her kingdom from being swallowed up by the Roman Empire. But the victors always get their way in portraying the conquered.

I believe the traditional way of looking at this play is of the great man brought down by his fascination with a rapacious woman. However, pay attention to the difference between how the characters talk about the nobility of the Romans and how the Romans actually act. I think something more subtle is going on here. I don’t see much evidence of a great man in this play. I see a soldier who pretends to be a noble Roman and is not. I see a female ruler who is more of an enigma, who controls her own shifting image, like a chimera. 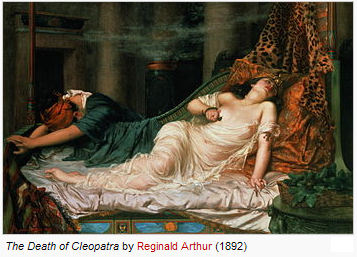 Not having the strongest grounding in classical literature, it is not always clear to me what is going on during the political maneuverings and battles, and which characters are on whose side. Of course, it is a historical fact that Cleopatra fled the battle of Actium with her ships at a strategic point, causing the battle to be lost. Why she did so is still a mystery.

For a different view of Cleopatra, although maybe a closer view than Schiff thinks, see Stacy Schiff’s excellent biography.