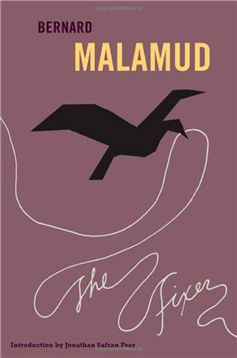 In 1911 Russia, Yakov Bok is tired of his difficult life in the shtetl. So, after his wife leaves him for another man, Yakov travels to Kiev in hopes of making a better living. When he helps a drunken man who is passed out in the snow, Yakov is offered a job supervising a brick yard. However, in order to take this job, Yakov must live in a part of the city forbidden to Jews.

It is this circumstance followed by a series of mishaps that ends up with Yakov being accused of murdering a boy he chased away from the brick yard. As the case continues, it becomes clear that the murder is being used by authorities an an excuse to trump up charges of ritual murder against the Jewish community.

The novel becomes more and more difficult to read as literally everything that happens to Yakov makes things worse for him. The gentiles he knows in Kiev tell lies about him. Once he is in prison, the jailers do everything they can to incriminate him, including trying to entrap him into breaking the rules or admitting his guilt.

Yakov goes into jail a nonpolitical, irreligious, naive man who hopes for justice, and the novel is partially about his development into an angry man who refuses to be beaten. Although almost nothing in the way of plot or action happens from the time he goes to jail, I was absolutely compelled to finish reading.

Written in a storytelling fashion that I associate with the tales of Sholem Aleichem or Isaac Bashevis Singer, this novel is more grim than most of the stories I’ve read by these other writers. However, both The Fixer and The Bloody Hoax, by Aleichem, are based on a true event from 1911 Kiev, called the Beiliss blood libel case.