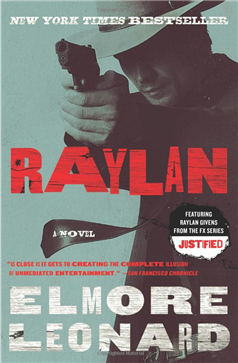 My husband and I recently got hooked on the TV show Justified, which is just as surprising to us as to anyone who knows us, because it is fairly violent. One of the things we like about it is the well written, darkly humorous script. After we watched a couple of episodes, I paid more attention to the credits and discovered that the series is based on stories by Elmore Leonard, which explains a lot. It was with interest, therefore, that I discovered this book, titled after the main character in the series, Raylan Givens.

Marijuana growing has become the cash crop for Harlan County, Kentucky. As a deputy US Marshall, Raylan Givens isn’t concerned with drug enforcement. But Dickie and Coover Crowe have decided to expand their drug business by dealing in body parts. When Raylan tries to serve a federal warrant against Angel Arenas, another marijuana dealer with ties to the Mexican Mafia, he finds him bloody in his motel room with his kidneys removed.

Raylan is on to Dickie and Coover very quickly, as they’re not the brightest of bulbs. He is more interested in catching the doctor who is removing the organs, figuring the Crowe boys aren’t smart enough to cook up this scheme themselves.

This case is solved about midway through the novel, and Raylan gets roped into providing security for Carol Conlan, a representative for a coal company that wants to blast the top off the last remaining mountain in the area. Raylan is not sympathetic, but he is more concerned about the old man who was supposedly shot to death by Boyd Crowder after firing his shotgun at Carol. The old timers who knew Otis claim that if he was shooting at Carol, she’d be dead.

The writing is darkly humorous, with the style of the local dialect skillfully recreated. My problem with this novel is it has no focus except perhaps around the character of Raylan. It reads as if it were quickly put together from several short stories rather than plotted out as a novel. I was a little disappointed.