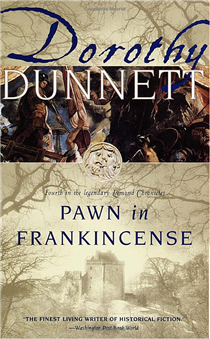 In the fourth exciting book of the Lymond Chronicles, Francis Crawford of Lymond sets out to find his two-year-old child by Oonagh O’Dwyer, hidden somewhere in the vast Ottoman Empire. He disguises his personal mission with the official one of delivering an elaborately decorated piano from the King of France to the Sultan in Constantinople. Another goal is to find and kill the traitor Graham Mallet Reid, who has the child in his power. The problem of the child is complicated because Lymond doesn’t know which of two boys, one Reid’s by his sister Joleta, is his own. Another complication is that if any harm comes to Reid, the boys, under the protection of Sulieman, will both be murdered.

Accompanying him and his household are a couple of merchants, including the mysterious Marthe. Raised in the household of the Dame de Doubtance, Marthe, except for her sex, could be Lymond’s identical twin.

After some disastrous adventures, Lymond believes he has sent home the redoubtable fifteen-year-old Philippa Somerville, who foisted herself upon him thinking he would need her help to care for the child. However, she is actually on her way to join the seraglio to find one of the boys, Kuzum, while Lymond searches in the stews of the city for the other one, Khaireddin. Philippa’s role in this novel is a major one, with her character and her opinion of Lymond changing and maturing as their adventures continue.

Aside from the intrigues taking place in an empire that is Byzantine in its complexity (not to make a pun), Lymond is hampered in his activities because of sabotage by a member of his own household staff. He also suffers from his usual problem of failing to explain his actions to his adherents, such as Jerrott Blyth, so that they become angry and occasionally work against him.

In action that moves from Marseilles across Europe to North Africa and finally to Constantinople, Lymond’s concerns grow to involve the fate of nations.