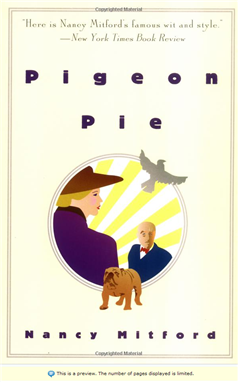 This exceedingly silly book about Britain just before World War II has its amusing moments. Although it is not one of Mitford’s best, it still made me laugh out loud at times. The novel spoofs British high society, spy stories, and religious cults.

The heroine is Lady Sophia Garfield, a stupid, frivolous society matron who lives happily, mutually ignoring her husband, who admires Hitler. As events move toward war, she begins to suspect she has a nest of German spies in her home. Although no one believes her, she eventually manages to foil them.

One of the funniest moments for me has to do with Lady Sophia’s chief social rival, whom she distinctly remembers as the ordinary school girl Baby Bagg but who goes around pretending to be a Russian princess, Olga Golgothsky. Inclined to the theatrical, Olga frequently makes remarks about what would happen to her if she went to Russia–she says she would be handed over to the peasants to do what they please. Our heroine reflects on what Russian peasants must be like, thinking that if she were handed over to British peasants to do what they please, they would put her in the best bedroom and give her a cup of tea.