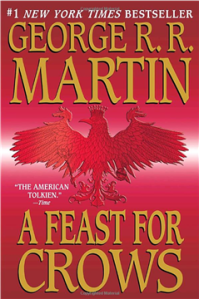 Best Book of the Week!
It’s been awhile since I reviewed a book in A Song of Ice and Fire, and at the rate I’m going, the next book will be out before I catch up!

At the beginning of this fourth novel in the series, the War of the Five Kings is almost over, and several of the contenders for the crown are dead. Stannis Baratheon is the only king who has responded to the cries for help from The Wall, where Jon Snow is now Lord Commander of the Night’s Watch. Stannis’ religious beliefs are causing problems at The Wall, however, particularly because he has brought along the witch Melisandre. Jon must send his friend Sam and Maester Aemon away from the wall to save the maester’s life, as his family is an enemy of the Baratheons.

Tyrion Lannister is accused of murdering his father Tywin and has fled the city. Cersei Lannister’s son Tommen is now king, with Cersei acting as Regent. This situation in King’s Landing is a dangerous one, because Cersei is clearly a psychopath. She has complete control over the city and has many megalomaniacal plans, including trying to bring down her son’s wife. However, she soon seems to be working toward her own defeat.

Brienne, having long ago promised Catelyn Stark to save her daughters in exchange for Jaime Lannister’s freedom, is still searching for Sansa Stark, who has been removed to the Eyrie for her safety by the creepy Petyr Baelish, also known as Littlefinger. Littlefinger has been pretending that Sansa is his daughter, but he soon murders his wife and plans to put Sansa in her place.

Cersei has sent her brother Jaime to the Riverlands to establish order. He seems to be getting disillusioned with Cersei, and is appalled she has made him break his promise to Catelyn, among others. After all, “Lannisters always pay their debts.”

Arya Stark has crossed the waters to Braavos, where she has found shelter in the House of Black and White, a temple of assassins. When Arya kills a man who bragged that he deserted the Night’s Watch and then confesses the murder to the Kindly Man, her mentor, he gives her a potion to drink and she wakes up blind.

Characters have died and Daenerys is not featured in this novel, but new characters are being brought to the fore. In Dorne, Arianne Martell, princess of Dorne, tries to force her father, Doran Martell, into war by attempting to have Myrcella Baratheon, his ward, crowned as queen of Westeros. This plot results in tragedy.

Without giving away too much, it is difficult to convey how exciting this series is. One of the most intriguing features is that you never know what is going to happen with a character. Martin has populated this series with a plethora of them—so many that you need the reference at the back of the book to keep track of the minor ones—but your favorite character in one book can be dead in the next, or maybe not. He is skillful at depicting characters who are convincingly human and keeps up the suspense masterfully.