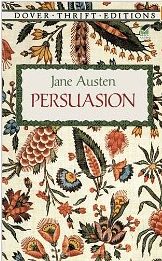 Most people have probably read Pride and Prejudice, which is a wonderful book, but if I had to pick my favorite Jane Austen heroine, it would be hard to decide between Elinor Dashwood of Sense and Sensibility and Anne Elliot of Persuasion. Probably fewer people are familiar with Persuasion.

Anne is no longer in the bloom of youth. Seven years ago she fell in love with a young naval officer named Frederick Wentworth, but Sir Walter, her superficial, supercilious father, did not approve. Perhaps the gentle Anne would not have been dissuaded from marriage, but her older friend and mentor, Lady Russell, talked her out of the engagement because of Wentworth’s lack of wealth and social position. Anne listened because she viewed Lady Russell as a surrogate mother, and she hasn’t heard from Wentworth since.

Now the family has fallen upon hard times, and Sir Walter is forced by his profligacy to lease their house and take rooms in Bath. He and Anne’s fashionable sister Elizabeth care very little for Anne, and they leave her to close up the house and make all the arrangements for its occupation by an Admiral Croft. Much harassed, she readies the house and tends to her hypochondriac, selfish sister Mary Musgrove. At least she enjoys the company of the children and Mary’s genial in-laws, with their two daughters Henrietta and Louisa and Anne’s brother-in-law Charles.

Anne meets the friendly Admiral and Mrs. Croft, and between their society and that of the Musgroves, begins to find a little pleasant enjoyment. However, she is soon dismayed to learn that Frederick Wentworth is Mrs. Croft’s brother, and he will be arriving soon. Wentworth is now wealthy and has retired from the service.

When he arrives, Wentworth pays little attention to Anne; in fact, she overhears him saying that she has changed so much he would not have recognized her. This remark distresses her very much, as her feelings have not altered. Soon he appears to be courting Louisa Musgrove. Anne finds it easiest to send Mary off into company while she stays home with her nephews.

After Louisa has a fateful accident on an outing in Lyme Regis, Anne finds herself taking charge and summoning help. Then she returns with Wentworth to notify Louisa’s parents. Feeling superfluous after the Musgroves leave with Wentworth for Lyme Regis, Anne decides she has no choice but to join her unpleasant father and sister in Bath.

What I love about Anne is her understated good will. Despite the insults by her family members and their general bad treatment of her, she tries to help them and to be a true sister and daughter to them. Despite Wentworth’s slights and attention to Louisa, she hides her feelings and remains faithful in her heart. Anne has much in common with Elinor Dashwood, except that Elinor is well regarded by her family and Anne is not. There is something delicate and understated in this novel, and in all of Austen’s work, that I appreciate in this more tempestuous modern world.