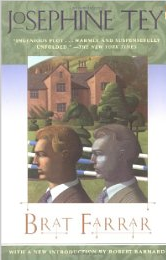 I have only read a few mysteries by Josephine Tey and have had mixed reactions to them. I really enjoyed The Daughter of Time, but disliked The Franchise Affair. Brat Farrar is completely different from either of those novels, and I enjoyed reading it.

Patrick Ashby, the 13-year-old heir to the Ashby fortune, disappeared three years go. This novel isn’t a mystery about whether Brat Farrar is an imposter–we know that from the beginning–but about what actually happened to Patrick.

Brat, an orphan who bears a surprising resemblance to the Ashbys, is talked into impersonating Patrick, despite his better instincts, by a ne’er-do-well cousin of the Ashby’s. This cousin has carefully coached him for his part, with the understanding that after Brat inherits, he will pay the cousin a pension. Once Brat arrives at the house, he feels surprisingly at home with the place and the family, except for Simon, his supposed twin brother.

The characters are likeable, and the story keeps your attention, even though I figured out the solution to the mystery fairly early on.