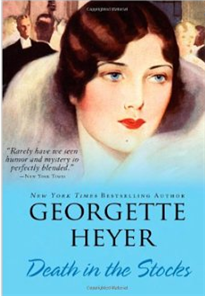 If you enjoy Georgette Heyer’s Regency novels but have never read any of her mysteries, you’re in for a treat. I’m not saying they are hard to guess, because she is so good at creating lovable characters that usually the murderer is the only character you don’t like (although in Death in the Stocks there are several unlikeable characters). But her mystery novels are funny and full of eccentric personalities. In addition, in true Golden Age form, the victim is often someone who deserves his or her fate.

A dead man is found murdered on Ashleigh Green, locked in the stocks. The victim turns out to be Arnold Vereker, a wealthy man with plenty of enemies, including most of his family members. Vereker used his local cottage as a nest where he entertained loose women.

When Superintendent Hannasyde goes to investigate the cottage, he does find a woman there, but she is Vereker’s half-sister Antonia. She has come down from London to argue with him about his having forbidden her marriage, as he was her guardian.

The list of suspects extends to Antonia’s brother Kenneth, who is the heir, his girlfriend Violet, Antonia’s shady fiancé, and Leslie, a friend of the family. Finally, the victim’s long-lost brother Roger reappears and claims his fortune.