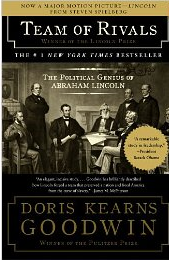 Doris Kearns Goodwin begins her examination of Lincoln’s administration by remarking that because so much has been written about him, everything might be thought to have been said. However, by examining his career in terms of the team he put together to run the country, she found much more to write about.

This team consisted of his rivals in politics. Edwin Stanton, who treated Lincoln with contempt on their first meeting and who Lincoln made Secretary of War, was griefstricken at Lincoln’s death. Salmon P. Chase, eternally Lincoln’s rival for the presidency and a frequent undercutter, was an extremely competent Secretary of the Treasury. William H. Seward, the favorite for the Republican presidential nomination that Lincoln won, was at first inclined to underestimate Lincoln but became his closest friend and advisor as Secretary of State. Edward Bates, the Attorney General, was a homebody who was not sure he wanted a public life and at first looked upon Lincoln as well-meaning but incompetent, but ended up thinking he was very nearly perfect.

Team of Rivals begins on the day of the Republican convention of 1860, in which, of the rivals who had some expectation of winning the nomination of the party, Lincoln would seem to have the least. Seward was the odds-on favorite, but he had made many enemies in the party. Chase’s overwhelming ambition for the presidency lead him on several occasions to ignore the warning signs that he would not be the nominee. Bates was willing to act if nominated but made no extraordinary efforts because he preferred his home life.

Goodwin’s narrative then turns farther into the past to trace the men’s respective careers. In this examination she shows how Lincoln cleverly set himself up to be everyone’s second choice for the Republican nomination.

The book follows Lincoln’s nomination, campaign, and stunning victory, but the bulk of it concerns the compelling story of how he put together a cabinet containing these men, who were not only rivals for the office but who were from different regions of the country and who had different views on the important issues of the day. He then managed to work with these men and run the country during one of its most difficult times. It was frequently rumored that Seward actually held the power, but Goodwin shows us that Lincoln was always in charge.

Through an examination of the diaries of the men, letters, and other sources, Goodwin provides us with the fascinating details of political machinations, the conduct of the war, the fights among the generals, the alliances and friendships, and the story of how several men, who began with no esteem of Lincoln at all, grew to respect and love him.

Goodwin’s book is one of the most absorbing history books I have read. Although it is long and takes awhile to read, it explains each issue in completely lucid terms and interesting detail. The most important thing I got from the book was a fuller understanding of Lincoln’s greatness, his humor, kindness, and magnanimity–and what a disaster for the country his death was.