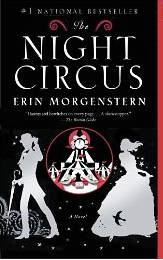 Both children grow up training for this elusive competition, and when they are adults, the man in the gray suit collaborates in creating the Night Circus and sends his protégé Marco to work for its designer. Soon Celia is employed by the circus as an illusionist, and Celia and Marco take up the competition with no understanding of its rules. Celia doesn’t even know who her opponent is.

The Night Circus is a marvelous place, all white and black and gray, constantly growing and changing. It becomes the venue for and creation of the competition.

The Night Circus has been extremely popular, and it seemed like it was right down my alley. However, although it is entertaining enough and is certainly based on an original idea, at some point my interest began flagging.

I think one major problem of the novel is that we are constantly told how wonderful the circus is, but Erin Morgenstern fails to describe it in a compelling way. Descriptions are vague instead of specific enough for readers to imagine a scene. In two or three consecutive pages, for example, I just happened to notice that Morgenstern used the word “elaborate” five or six times with no attempt to describe each object beyond that word. The details she does divulge don’t sound as if they would be that interesting, and frankly, a black, white, and gray circus seems to be the invention of a person more concerned with style than enchantment. An important part of a circus is the vibrancy of color. I felt no sense of wonder, was never surprised or beguiled, and I was occasionally confused, especially concerning the “wonderful coalescence” described in one scene. What does that mean? Although the competition turns out to be about life and death, I also never felt any sense of danger.

Another problem for me is the fable-like quality of the novel, which treats the characters more emblematically than as real people. You feel some sympathy for Celia and Marco, but you don’t know what they are like. Overall, I found the novel mildly disappointing.