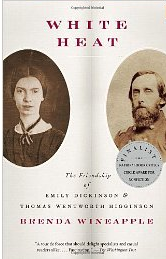 White Heat is an unusual biography that focuses on the friendship between Emily Dickinson and Thomas Wentworth Higginson. The book is unusual because so little is known of the daily life of Dickinson and much is known of that of Higginson. Brenda Wineapple has pieced together the story of their relationship from what is left of letters (Higginson’s to Dickinson were destroyed with much of Dickinson’s correspondence, but there are letters to others) and from poems sent to Higginson by Dickinson. Wineapple is the author of an admired biography of Nathaniel Hawthorne.

Their relationship was almost entirely in letters. By the time they began their correspondence, Higginson was a well-known writer of essays on nature and politics but was even better known as an ardent and radical abolitionist and advocate of women’s suffrage. He ran guns to Kansas during the free soil days and helped encourage many women poets and got them published. Later, he formed the first African-American regiment in the Civil War. On the other hand, Dickinson had published one or two poems and frankly didn’t seem much interested in publishing more, but preferred to send them off to friends. She remained obscure and unknown, in her later years not even leaving the grounds of her father’s house in Amherst.

Dickinson initiated the correspondence by sending Higginson a flattering letter containing a few poems and asking him to be her preceptor–to tell her if her poems “sing” and to give her advice. Of course, she knew her poems sang and apparently had no intention of taking his advice, so it can be assumed that she wrote hoping to start a correspondence.

Although Higginson has been criticized as too conservative in his poetic tastes and as a bungler for his role in Dickinson’s legacy, part of Wineapple’s purpose is to rehabilitate his reputation, for he was in his own time a brave man of principle whose poetic instincts far surpassed his own abilities as a writer. He found Dickinson’s poetry both shocking in its unconventionality, especially of form, and breathtaking in its beauty.

The two remained friends for the rest of Dickinson’s life, although they only actually met twice. Their letters were sometimes flirtatious, but Wineapple convincingly suggests that most likely neither of them had any intentions beyond friendship and esteem. Higginson was married to a lifelong invalid and seemed to be too upright to consider the idea of dalliance. When his wife Mary died, he shortly remarried a younger woman in the hopes of finally having a family. Later, Dickinson became enamored with and probably engaged to a much older man who unfortunately died.

One purpose of Wineapple’s book is to show what actually happened to Dickinson’s poems after her death, when they were published in two volumes in an edited form, with grammatical, punctuation, and even wording changes by Higginson and Mabel Todd. Higginson has been excoriated for this, but Wineapple suggests that Todd did most of the editing, some of which Higginson strenuously objected to. Certainly Todd alone released a third volume of poetry that was even more heavily edited. Higginson seemed unaware that Todd was handling Dickinson’s poems (with her sister’s permission) as an act of both self-aggrandisement and of petty revenge against Sue Dickinson, Emily’s good friend and sister-in-law, and the wife of Todd’s lover.

Wineapple’s biography is engrossing and occasionally poetic in its own right. It is an excellent analysis of this unusual friendship.