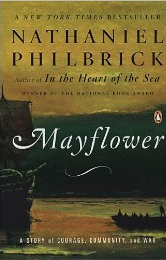 Mayflower: A Story of Courage, Community, and War is an eye-opening history of the Pilgrims, starting with their journey to America in 1620 and ending roughly 50 years later with King Philip’s War. King Philip’s War began as a small local conflict between the Plymouth Colony and King Philip, the sachem of the Pokanokets, and ended as a regional war that killed, author Nathaniel Philbrick reveals, a higher percentage of the population than any other American war.

What makes Mayflower most interesting is how Philbrick takes on the old myths–Plymouth Rock (if a rock was used, it wasn’t that one), the first Thanksgiving (actually begun by Abraham Lincoln, although there was a feast in early fall), Squanto (not such a nice guy), the courtship of Miles Standish–and provides new ways of looking at what happened.

Although the book touches on many aspects of the Pilgrims’ lives, a major theme is their relationship with the native people. The very bonds formed when Massasoit and the Pokanokets saved the original settlers from starvation and illness, when broken by the Pilgrims’ sons, are those that resulted in the destabilization of the entire New England region for years to come.

The book provides fascinating insights into these people, who had a mission for their own lives but little tolerance for others, who bravely founded a successful colony but fathered offspring whose greed, rigidity, and racism almost destroyed the results of those efforts. With his focus on relations with Native Americans, Philbrick skims over some other important elements, for example, the Pilgrims’ dissident faith, the expulsion of Roger Williams, the relationship between Plymouth and the colonies founded by Puritans and others. However, the book is focused on a topic that is interesting to a 21st century audience and has not had much discussion.