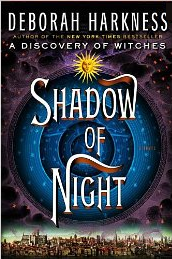 As with most second books of a trilogy, Shadow of Night is transitional and therefore harder to describe than the first book.

At the end of the A Discovery of Witches, the first book of Deborah Harkness’s “All Souls Trilogy,” Diana Bishop, an Oxford scholar and nonpracticing witch, and her husband Matthew Clairmont, a geneticist and vampire, were forced to flee because a union between a witch and a vampire is forbidden. Using Diana’s newly discovered time-travel skills, they have arrived in Elizabethan England so that Diana can find a witch to help her learn her powers. Even more importantly, they want to look for Ashmole 782, an enchanted manuscript that Matthew believes may hold the secret to the existence of witches, vampires, and daemons. This decision proves potentially hazardous, though, as the age they’ve chosen is one of persecution of witches and Diana has a tendency to draw attention to herself.

In Tudor England Matthew of the past is part of an intellectual group called the School of Night, the members of which include Sir Walter Raleigh and Kit Marlowe. Kit is a deeply disturbed daemon who is insanely jealous of Diana. Another hazard is that Matthew’s acquaintances may realize he is not the same person as the person from the past. In the meantime, both Diana and Matthew’s friends and enemies back in the present time watch for clues to their existence in the past.

Although this novel is a great sequel that propels you to the next book, it has the typical middle book problem of furthering the plot without arriving anywhere. Strictly because of personal taste, I could also have done without some of the heavy romantic passages, although other readers will like them. Nevertheless, I am extremely interested to see how Diana and Matthew will resolve all their problems in the final book.