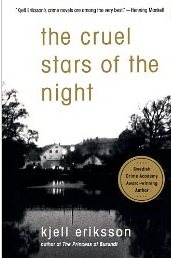 The Cruel Stars of the Night is Kjell Eriksson’s second mystery featuring Ann Lindell but the first one I read. Although the series is labeled Ann Lindell mysteries, the novels actually feature an ensemble cast of characters and take awhile to develop the personalities of the team in the Uppsala Violent Crime Division.

The chapters in this novel alternate between the investigations of the Violent Crime Division into suspicious incidents involving old men and the thoughts and experiences of Laura Hindersten, whose father is missing. After awhile, having information not available to the investigators, you realize how the two narrations are linked, but the team takes longer to connect the dots.

One of the two suspicious deaths of elderly men is that of Petrus Blomgren. He wrote a suicide note, but he was murdered before he could kill himself. The police are sure that Laura Hindersten’s father, a professor and Petrarch scholar, will turn up, but she is convinced that something horrible has happened to him.

The novel makes for an interesting enough story, although the only fully developed character is that of the serial killer. I am interested in reading more, though, and getting to know Lindell and her coworkers Sammy Nilsson, Allan Fredericksson, and Stig Franklin, better.