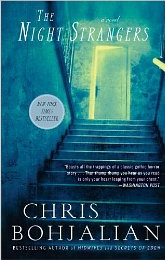 It’s been awhile since I’ve reviewed a real creepfest, but The Night Strangers by Chris Bohjalian is certainly one. The book is a combination of a ghost story and a thriller, and I don’t want to tell you what else.

Chip and Emily Linton move with their twin daughters to a small New Hampshire town after Chip has been traumatized by a horrific accident. As an experienced airline pilot, he tried to make an emergency plane landing on a lake, only to end up killing 39 people. The family moves thinking that Chip will recover sooner if he is away from people who know what happened, but of course that is impossible.

The Lintons purchase a historic house that hasn’t been lived in for awhile. The house has some strange things about it, for one thing a door in the basement that has been sealed with 39 carriage bolts.

Chip becomes obsessed with the door, and then he begins seeing three of his dead passengers. To the reader, it is not clear whether the house is haunted or whether Chip is losing his mind.

Some local women, all herbalists, begin to befriend the family. Some of them show an unusual interest in the twin girls. Soon we become aware that the history of the house is unsavory–and involves twins.

The story is uneven. At some points it seems to be going one way, at others another. Our dread rises, but we don’t know exactly which of two possible horrendous endings will come about or whether the Lintons can escape altogether. But if you appreciate a good psychological thriller and all-around creepy book, you’ll probably enjoy The Night Strangers.