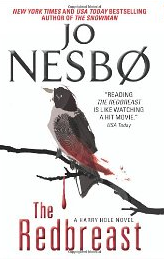 The Redbreast by Norwegian mystery writer Jo Nesbø starts out with Detective Harry Hole embarrasing his government by shooting an unidentified secret service officer during the American president’s visit. Naturally, he is “promoted” to a political office and assigned to investigate neo-Nazi activities in Norway.

He begins tracking Sverre Olsen, a neo-Nazi who recently escaped prosecution on a technicality. But that investigation is derailed when he comes upon evidence that someone has purchased an extremely powerful, rare rifle and may be planning an assassination attempt. At the same time, someone is killing old men who fought on the Eastern Front for the Germans in World War II, believing that they would prevent their country from being annexed by the Soviet Union.

In her attempts to help Harry with the investigation of who bought the gun, his ex-partner Ellen is murdered.

The novel was interesting and complex, with the story from WWII interleaved with that of Harry’s investigation. However, I didn’t find Harry very developed as a character. This lack of character development may be because this is the seventh Harry Hole book, but I believe that series books must find a way to balance the demands of new readers without being too repetitive for readers following the series. One way is to make sure that the main characters always seem like real people. That said, I may try reading some others to see if I get to like Nesbø’s work more.